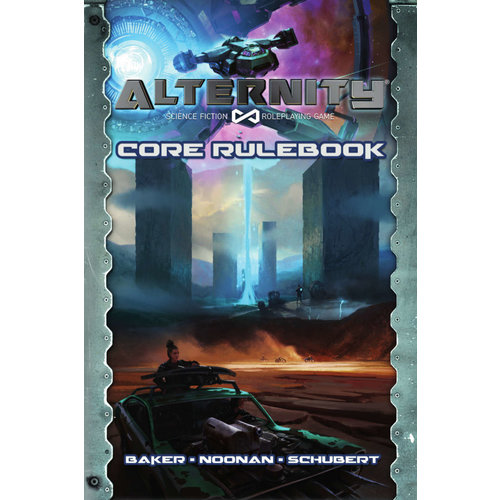 Strange new worlds and deadly aliens? Mercenaries for hire? Post-apocalyptic survival? Explore your favorite visions of sci-fi adventure in the new Alternity Science Fiction Roleplaying Game from Sasquatch Game Studio. Alternity is a sci-fi roleplaying game system suitable for a wide range of genres. Designed with modularity in mind, Alternity campaigns can be set across the spectrum of sci-fi genres: from hard sci-fi to space opera, or post-apocalyptic wastelands to alien conspiracies.

The Alternity Core Rulebook features a modular toolkit that you can use to build great characters and adventures in your favorite sci-fi universe—or in a universe of your own creation. It starts with the Alterntiy Core Rulebook, which covers character creation, futuristic technology, and adventure design, and includes a selection of dangerous aliens and villainous adversaries, as well as guidelines for building the universe that you want to run. Inside you'll find:

If you want to take a look at the rules, check out the free Alternity Quickstart Guide in the Alternity Demo Pack.
The Alternity Core Rulebook is the first product in the Alternity line, and upcoming releases will add even more options to your Alternity game. Be on the lookout for:
About Alternity: In 1997, Bill Slavicsek and Richard Baker created the original Alternity game - a tabletop RPG engine for science fiction adventure across a wide range of genres. Now, twenty years later, Richard and fellow Sasquatches David Noonan and Stephen Schubert have created a new sci-fi RPG inspired by the original game. We've rebuilt the game mechanics to take advantage of 20 years of advancement and experience in the art of game design. A crowdfunding success, the Alternity line includes a number of upcoming supplements: the starship focused Shipyard; more aliens and adversaries in the Xenologist's Guide; the campaign setting/adventure series of the Protostar Mission Guide; and more to come!
Close
Compare products
0
Start comparison
Please accept cookies to help us improve this website Is this OK? YesNoMore on cookies »