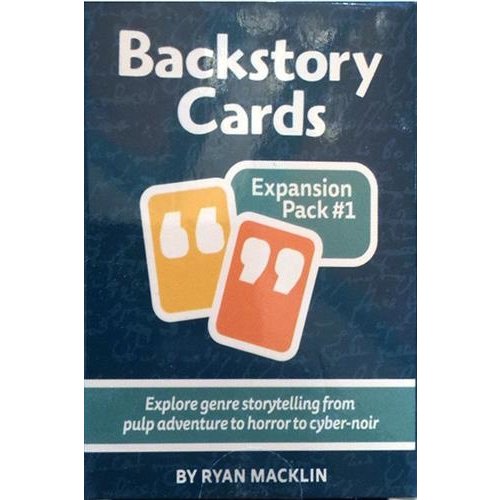 Surprise yourself with new character possibilities

Need inspiration for a character story and motivation? Expand the connections between your characters and the world with even more Backstory Cards prompts. This two-for-one package of “Even More” and “Setting Elements” expansions give an array of ideas and probing questions on every card. For use with Backstory Cards,or by itself as an inspirational tool for any roleplaying game.

Backstory Cards help you and your friends create vibrant backstories for roleplaying games, no matter the system or genre.

Backstory Cards blend your characters and setting concept into an intriguing set of relationships and history. It’s tailor-made for games where the player-characters already know each other—from fantasy adventurers to star marines, from supernatural beings who share the same city to global-hopping troubleshooters.

This deck of cards works well with most roleplaying games, including GM-less ones. It also includes how to directly integrate Backstory Cards into Fate Core and Fate Accelerated’s character creation.

How to Use Backstory Cards

You start by coming up with your character concepts and a few elements of the setting—up to three individual NPCs, groups, places, and events. You can come up with the setting elements ahead of time, or create them during the Backstory Cards process. We even have some pre-made settings for you to use right away or to use as examples.

Taking turns going around the table, each player draws a Backstory Card and answers the prompt on the card. Prompts incorporate random setting elements and other PCs, leading to unexpected situations. You all do this a couple times and you’ve got some great backstory!

Have you ever run into the “you all meet in a tavern” problem? None of the characters in this situation have any real history, but they’re expected to work together. Why should they go on an adventure? Backstory Cards help solve that problem with rich prompts to help get the creative juices flowing.

And if you’re an expert at coming up with interconnected characters, Backstory Cards is still great for you because it’ll create questions and situations that you won’t expect. It also serves as a backup for when you generate some backstory but are drawing a blank.

You can use Backstory Cards to instantly give one-shot and convention games a living, breathing history, allowing for deeper story and more player engagement with minimal preparation whether you’re creating characters before the session or creating them together at the table.

Backstory Cards are useful anywhere that creating relationships between characters is an important step.