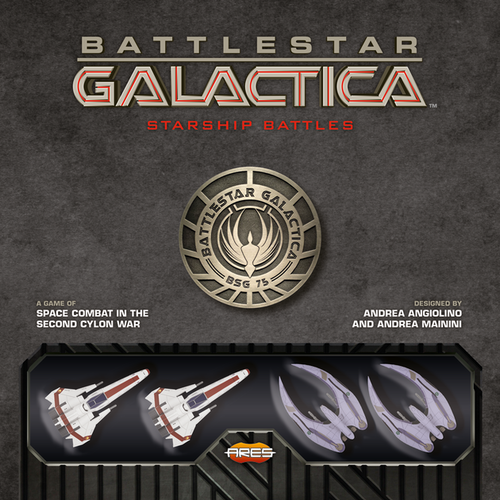 In BATTLESTAR GALACTICA — STARSHIP BATTLES, players take control of Colonial and Cylon spaceships and face each other in furious dogfights and daring missions.

The innovative game system features easy to learn rules, a unique set of maneuver cards for each spaceship, and two exclusive devices — the control panel and the rotating miniature base. You will be able to relive on your tabletop the exciting combat sequences from the TV series, just a few minutes after opening the box!

You can begin playing with the Quick Start Rules, to handle a simple dogfight where the goal is eliminating your opponents. Once you’ve learned the basics of flying and fighting with a spaceship, you can go to the Complete Rules and experiment many other scenarios, and then add further details to the game by including some or all the Optional Rules and using Optional Features, which add special elements to the game, from pilots’ abilities to the use of asteroid fields and planetoids.

This Starter Set is a complete combat miniature game, but it is also your starting point for the whole range of Battlestar Galactica — Starship Battles products. You can add more spaceships to your games with additional Starter Sets or Spaceship Packs.