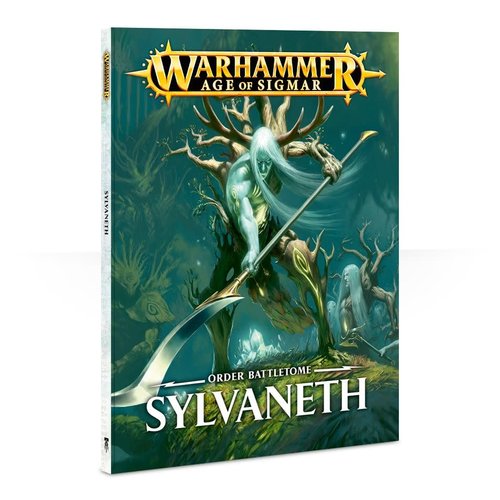 The spirit­song rises, and the sylvaneth march to war!

The air sings with glorious life magic as the children of Alarielle surge into battle. The reborn goddess of war leads from the front as glorious Wyldwoods burst forth from the heaving ground, called into being by ancient spirits. Determined to protect the Realm of Life, mighty Wargroves advance, crushing enemies with the inexorable strength of nature. Outcasts and Free Spirits strike suddenly and without warning, slaughtering the foe mercilessly to cleanse the tainted land. The sylvaneth’s rebirth will be remembered as a harbinger of absolute vengeance.

– Rites of Battle: potent abilities that can be conferred on armies with the Sylvaneth allegiance, and Command Traits that can be used by their generals; ­
– Spell Lores: powerful magic, both defensive and offensive, specifically for sylvaneth wizards; ­
– Artefacts of the Glades: relics of war, usable by sylvaneth heroes;
– 3 Battleplans, helping you to fight glorious battles based on the narrative leading up to them;
– 5 Warscroll Battallions, collections of miniatures who gain special abilities when combined; ­
– 8 special Warscroll Battalions called Wargroves. These give you even more special abilities, magic items, command traits and spells;
– 1 Historical Battalion, the Guardians of Alarielle, which recreates the alliance between the sylvaneth and the Stormcast Eternals;
– details of the history and organisation of the sylvaneth, with full background for every unit, character and monster in the faction.