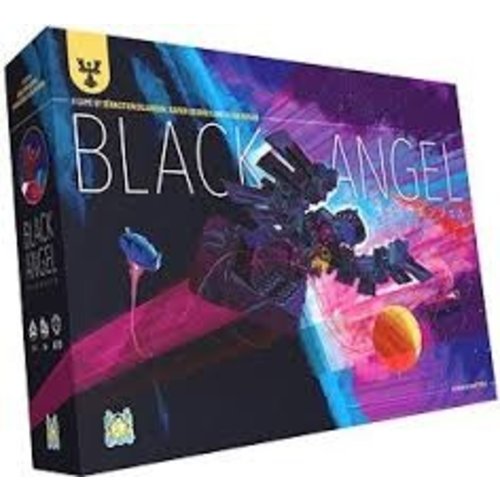 The Black Angel, the first intergalactic frigate in history, must transport the genetic heritage of humanity beyond known worlds, over a journey that is likely to last several thousand years.

It's also the name of this board game. Coincidence?

Her crew will be composed of only robots. Because no nation is willing to trust creation of the AI (artificial intelligence) that will control this crew to any other nation, a compromise is found: The Black Angel will be co-managed by several AIs, and the utility of each decision will be evaluated in VP (Validation Process).

You act as one of these AIs, controlling robotic processes on the ship, until you safely bring the residents of a long abandoned planet earth to a new home.

At the completion of this long and perilous voyage, when a new inhabitable planet has been reached, the AI that has earned the most VP will be entrusted with reawakening Humanity, and overseeing its new start….

This game involves some hand management, a slide and push mechanic and a lot of fun tactile pieces on a great shared board. This game has a long play time, but it is so immersive in the science fiction theme. One really does feel like the future of humanity is at stake on The Black Angel.