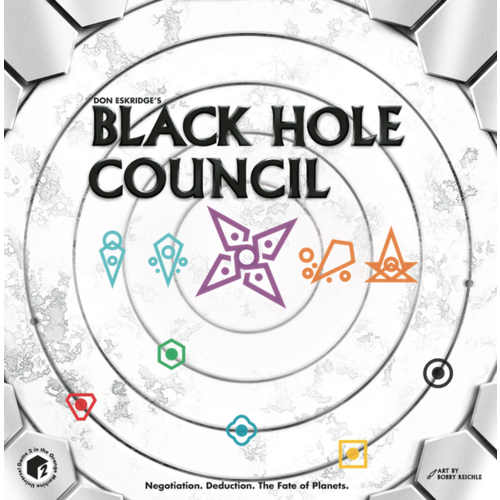 Black Hole Council is a 4-8 player negotiation and deduction game about deciding the fate of 32 different planets. Players take on the role of Councilors on the Black Hole Council. Each Councilor has been paid off by shady organizations, and so has a secret agenda card they're trying to fulfill. During six negotiation rounds and three deductions rounds, players attempt to achieve their agenda and guess the goals of other players.

During negotiations, a leader chooses whether to settle, tax, mine, conquer, or "black hole" five different planets while the other Councilors attempt to influence the leader's decision. This happens while a two-minute sand timer is running, and after it runs out, all players except the leader vote on the proposal. If it passes, all players advance (or not) on the influence track, depending on how well they did during the negotiation.

The more players can negotiate to achieve their agenda and deduce what other players' goals are, the more likely they are to advance on the influence track and become the new de facto ruler of the Council.