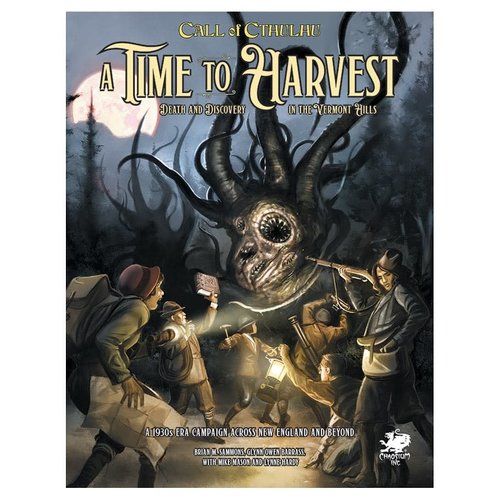 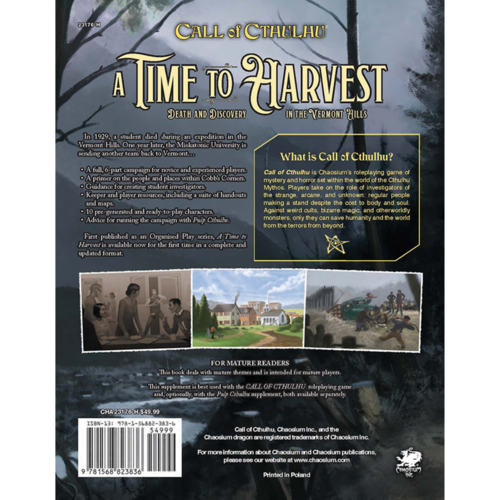 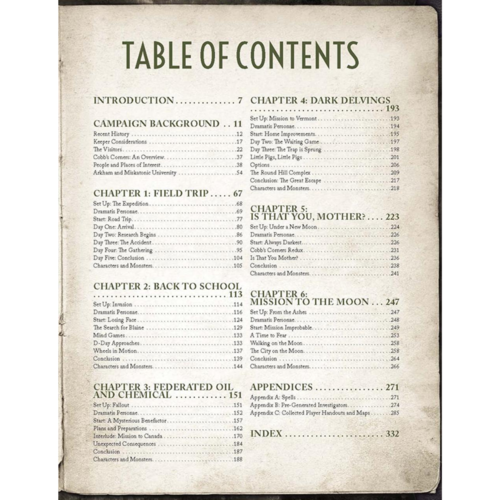 CALL OF CTHULHU RPG: A TIME TO HARVEST

A campaign book for the Call of Cthulhu roleplay game! Read more

Product description
Related products
Description
Mystery and Horror | Percentile System | Campaign Book
In 1929, a student died during an expedition in the Vermont Hills. One year later, the Miskatonic University sent another team on the same expedition…

It's time to harvest.

First released as a six-scenario Organized Play series, A Time to Harvest is available now for the first time in a complete and updated tome. The campaign is compatible with both Call of Cthulhu and Pulp Cthulhu rules.

Set in the picturesque state of Vermont at the beginning of the 1930s, A Time to Harvest is a six-part campaign centered on the valley surrounding the sleeping town of Cobb's Corners. A wellspring of resources for the Keeper, the book includes a full suit of player handouts, maps, and details on the key locations preparing you for both the events of the campaign, as well as giving you plenty of information to write your own scenarios set in 1920s Vermont.

A small town nestled in a bountiful valley, Cobb's Corners is a key location in A Time to Harvest. The book details the Vermont town, helping you bring it to life at the tabletop, and to give the setting for your games of Call of Cthulhu a rich, lived-in feeling.

A Time To Harvest contains new rules and advice for creating student investigators. Additionally, there is information on incorporating existing characters into the campaign by bringing in your investigators that have cut their teeth in other scenarios for Call of Cthulhu.

The book includes 10 pre-generated investigators, giving new and eager players everything they need to jump right into the mystery of Cobb's Corners.
Close
Related products 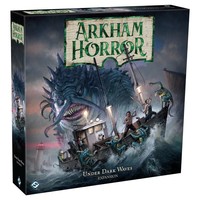 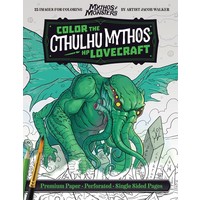 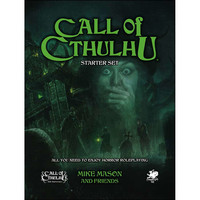