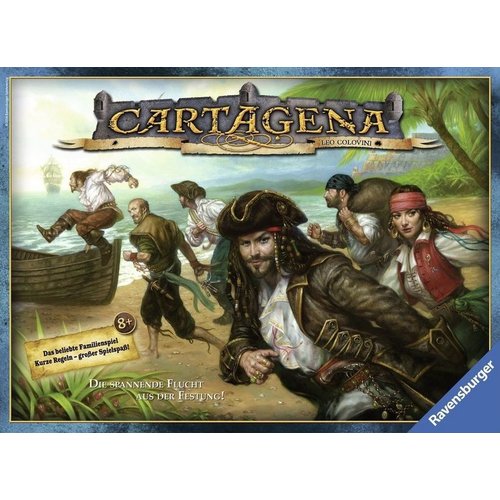 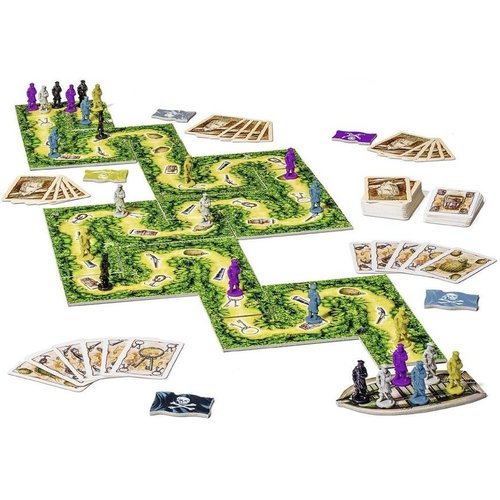 artagena takes as its theme the famous 1672 pirate-led jailbreak from the fortress of Cartagena. Each player has a group of six pirates, and you want to be the first to have all six escape through the tortuous underground passage that connects the fortress to the port, where a sloop is waiting for them.

To move a pirate, you need to play a card from your hand. Each card bears one of six symbols (dagger, pirate hat, etc.), and when you play a card, you move one of your pirates forward to the next matching symbol in the tunnel, leapfrogging over matching symbols where another pirate already stands. The only way to get more cards, however, is to move backwards; more specifically, you move one of your pirates backwards to the first space that holds one or two pirates, drawing one or two cards after doing so. Each turn, you take 1-3 actions, whether moving forward or backward or both.

When you move a pirate to the end of the track, it jumps on the sloop where it must await the other pirates in its crew. With every step toward victory, though, you have fewer and fewer pirates to move each turn, possibly locking you in to actions you don't want, so be sure to plan ahead and not leave yourself empty-handed!