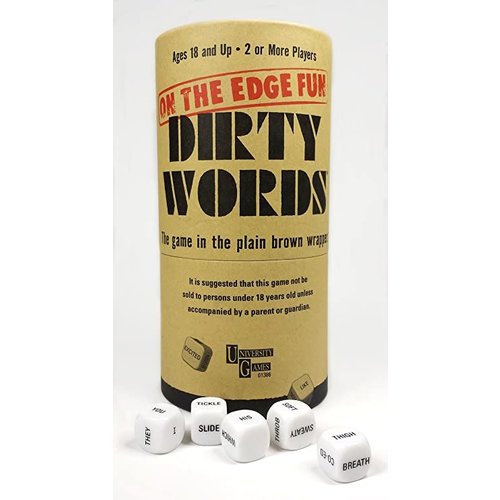 SETTING UP THE GAME
Plan to play this game with someone you love (or would like to).
The following is suggested before starting the game:

When the mood is all set, place all 28 Word Dice on the table. Use the lower half of the cylindrical package as your Dice Cup. Grab a piece of paper and a pen for scoring (not included).

OBJECT OF THE GAME
The object of the game is to use as many of the 28 Word Dice as possible in the three minutes allotted to form logically correct sentences. All sentences must intersect at one or more points.
Correct: They desire her lips
Incorrect: They lips her desire
The player or team with the highest score at the end of the game wins.

players desire. It should be noted, however, that blank Dice have no point value when calculating the point total.

I SPANK SHE SPANKS YOU ARE SPANKING WE SPANKED
(Note: the ending of -PERY may also be added to the verb SLIP, making it the adjective SLIPPERY.)

WINNING THE GAME
The suggested game length is three rounds...if you can last that long. The person or team with the highest score at the end of the game is declared the winner, and presented with an M.D.W. (Master of Dirty Words).