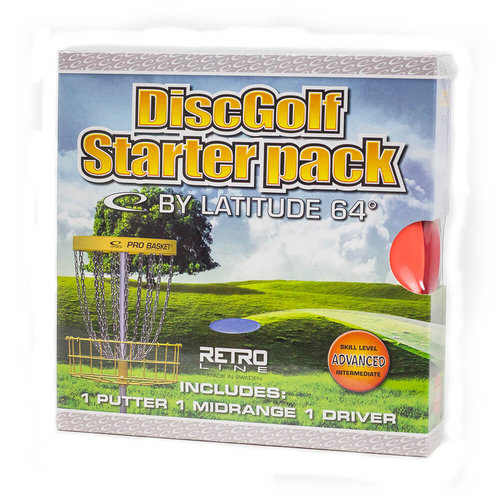 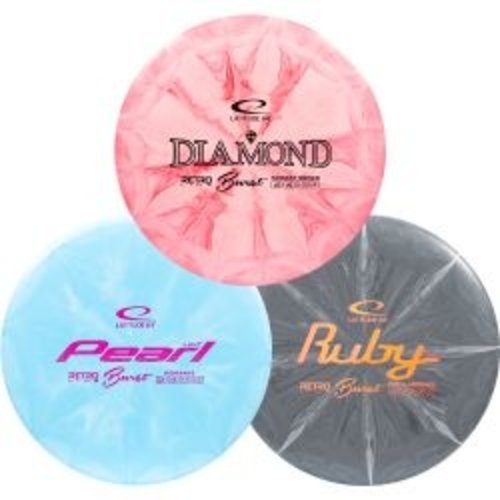 The Beginner Retro Disc Golf Starter Set from Latitude 64 comes with everything a new disc golfer needs to play disc golf - a putter, a midrange, and a driver. Inside you will find three of the easy to use line discs from Latitude 64.

Disc weights and colors will vary.

About the Retro Diamond:
Diamond Light is the choice of disc for beginners, children, and people who don't throw very far. It is produced only in weights between 140g-159g. which makes it easy to throw and control. It has an understable flight path with good glide and small fade.

About the Retr Pearl:
The Pearl is the second disc in the Easy-to-use series of discs from Latitude 64 that started out with the Diamond. The Pearl is a midrange with a small grip, low weight starting at 150g, and a neutral flight path.

About the Retro Ruby:
he Ruby is a Putter with a small grip, low weight starting at 150g, and a neutral flight path. With the release of the Ruby, the Driver-Midrange-Putter combo is complete and Latitude 64 is happy for all the positive feedback they have been getting on the Diamond and the Ruby and Pearl as well from their testers.

About Retro:
The mid-80s was a great time. Disc Golf had just come all the way up to Latitude 64 and we played all through the night in the midnight sun. Translucent discs were far from being invented and all discs were understable with today's standards. We remember those days with nostalgic feelings and wanted a plastic that would remind us of how it used to be. For a long time, we have had requests that we should make discs that could be broken in more easily. Test after test after test led us to this new plastic blend that we have named Retro.