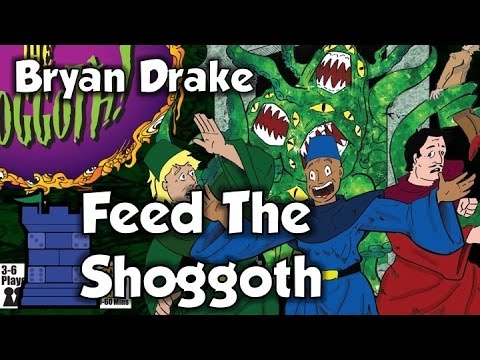 Feed the Shoggoth! is a devious and fast-paced card game, in which players each  control a different cult faction, facing a very angry and hungry Shoggoth in the middle of the table. Players earn points and win the game by sacrificing minions from their cult to the Shoggoth (bad news for Minions, but what do you expect when you join an evil cult?). However, the Shoggoth is indiscriminate in who he eats; if you can’t feed the Shoggoth on your turn with a Minion, it eats you, and you’re out of the game!

(A Shoggoth, in case you don’t know, is a large, amorphous blob of protoplasmic flesh, and the creation of horror author H.P. Lovecraft. Capable of creating eyes, mouths, and pseudopods at will, a Shoggoth is an extremely powerful beast, not to be trifiled with. Unless you’re an insane Cult Leader with delusions of grandeur, of course.)

Feed the Shoggoth! is a game for 3-6 players; games average about 45 minutes in length.