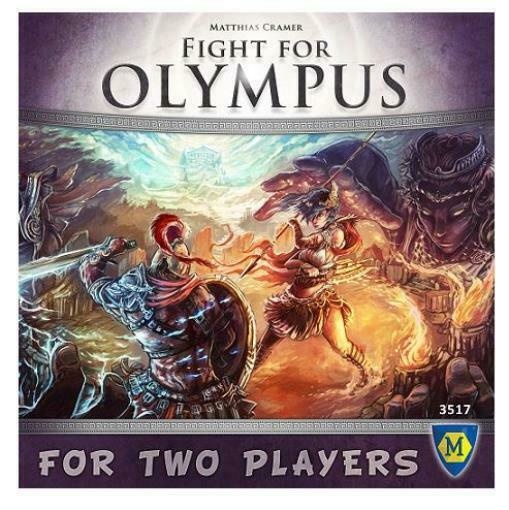 There’s infighting on Mount Olympus and some gods are packing up and moving out. This leaves some vacant spaces in the pantheon and you want to grab one. (Who wouldn’t?) Unfortunately, your opponent also wants one of these coveted spots, so you’re going to have to duke it out to see who enters the realm of the gods. Bring your heroes, soldiers and weapons (or your cards, as it’s far less of a logistical nightmare) and fight for your place among the gods!

Fight for Olympus is a two player, card-driven battle where players are managing hands of cards representing heroes and soldiers. You’re adding equipment to better your forces, resolving attacks, and deploying special abilities, all in an effort to win a spot on Mount Olympus.

The rules are simple. To begin the game, twenty random cards are removed from the deck and players are dealt hands of six cards from those that remain. The rest form a draw pile. Players take turns playing cards to the central board and then attacking their opponents’ units. (The board is divided into three areas: Olympus, Delphi, and Troy and there are spaces in each area where cards must be played. The areas of the board become more important during the attack phase of a turn, when area bonuses may be available.)