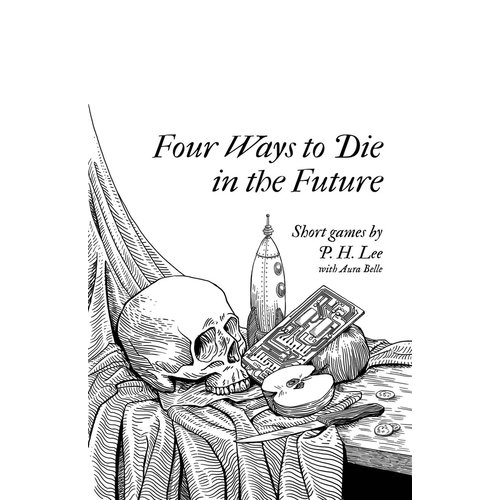 FOUR WAYS TO DIE IN THE FUTURE

Four Ways to Die in the Future is a collection of four short science fiction role-playing games about death.

Amidst Endless Quiet is a game for three to six players about the dying moments of Elios, a deep space transport struck by a stray micrometeorite while en route from Gliese to Zhou’s World. In addition to its cargo of physical art, block data, and biological samples, Elios carries five living human passengers, as priceless and fragile as anything. Elios will die, but before it does it has the opportunity to save one of its passengers, if it chooses. To make this decision, it will research its passengers, dream with them, argue with them and learn about their lives. In the end, one of them may live. The rest will die.

Island in a Sea of Solitude is a game for two players, played over video chat, about the relationship between two family members after one of them has died. One player plays the bereaved. The other players plays the buffered consciousness of the deceased. You’re lucky that your health insurance covers a full thirty minutes of buffering. How do you spend your last moments with your dead family?

Alone on Silver Wings is a creative journalling game for one player, Powered by the Apocalypse. It is played over weeks and years, sometimes with the help of others. When you play it it, you will write about your own life, your own emotions, your own world, and your own eventual death.

At some point in the future, you will die.