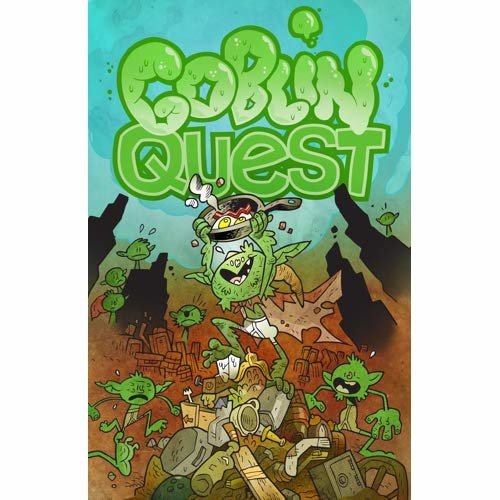 Goblin Quest is a tabletop roleplaying game about slapstick violence, fatal ineptitude, and the greatest adventure of your life.. Play five goblins each (in sequence, not parallel) and watch them meet hilarious ends while failing to achieve the most basic tasks. Will they survive the dangerous world of the Great Battle Camp and avoid the attentions of brutal orcs, murderous bugbears, mean-spirited hobgoblins and scary wizards? Probably not. But you'll have fun finding out!

The 120-page book is packed with full-colour art from "Calamity" Jon Morris, Iguanamouth and Tim Wilkinson Lewis, and has loads of ideas for great adventures from the leading lights of the game design world such as James Wallis, Ken Hite, Rob Heinsoo, Naomi Alderman, Merritt Kopas, and more.

This edition also contains illustrated rules-hacks to let you play the game in different settings, which are:

Kobold Quest: Create a machine that will please the Mighty Dragon King.

My Name Is Inigo Montoya Jr: They killed your father - prepare to die!

Sean Bean Quest: Play five Sean Beans (in sequence, not in parallel) and attempt to survive all the way to the end of a film.

The Cthulhu Files: Go irrevocably insane as you uncover secrets man was not meant to know.

Neither Super, Nor Heroic: Play the caped crusaders that got left out of the comic books.

Space Interns: The Explore Corporation wishes you luck on your alien diplomatic mission and reminds you not to damage your red jumpsuit.

Regency Ladies, The Roleplaying Game: Fall in love! Made snide remarks at balls! Refuse proposals! Throw your money around!