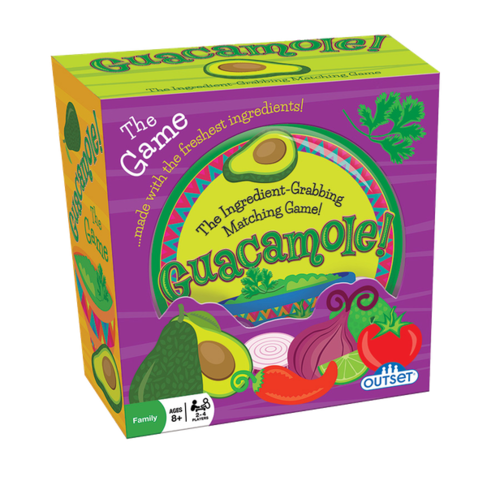 Looking for a spicy game to promote critical thinking? This clever new game has players frantically collecting all the ingredients for their own recipe of mild, medium or spicy guacamole! Be the first player to match 5 ingredients cards to the recipe card, and you get to keep that recipe card. Collect one of each type - mild, medium and spicy - and you win! Ole!

Players are dealt five ingredient cards, which are laid face up in front of them. The top recipe card is turned over and then players draw cards to improve their ingredients to match the recipe. If a card is kept, another card is discarded, so that players only have five cards at a time. Players may draw from the discard pile as well. The first player to match the exact number of ingredients to the recipe shouts "Guacamole!" and then wins that recipe card. The game continues until one player has won one each of the Mild, Medium and Spicy recipe cards. The game can either be played by turns or by "scramble" (where all players draw and discard as fast as they can at the same time).