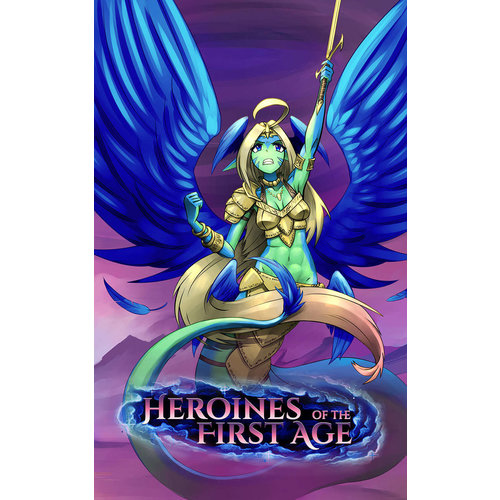 HEROINES OF THE FIRST AGE

Heroines of the First Age is a tabletop role-playing game about larger-than-life monsters and the dawn of civilization. HFA is the intersection between monstergirls, RPGs, and myth & legend.

HFA is the kind of game where the GM and the players collaboratively construct the specifics of the game setting at the start of play. This is detailed at the very beginning, in the Genesis chapter. Of course, the group can also decide to let the GM handle creating the game, or you can use a pregenerated setting, which we hope to produce in our Stretch Goals.

First, the group decides what the relationship between humans and demi-humans is, what the technology level is, and how magic works.

The group then goes on to describe what Power Pools are in play in their world. Power Pools are the metaphysical phenomenon that dictate the way the world works, what magic looks like, and what powers the gods might wield. But beware, Power Pools are far beyond the control of mortals; they are as treacherous as they are powerful. A number of Power Pools are provided for you to pick from, ranging from The Ink to the Everblood to the Restless Depths and the Screaming Sky.

Then the group has the opportunity to select a few gods or famous persons to populate the world with. Several names and titles are provided for inspiration, but it's up to the group to decide what they mean and where they fit in their world.

Next, the group works out a rough outline of the map, what cultures and regions exist. Regions are given descriptors and environments, and culture are described with dogmas, creation myths, and prophecies.

After the world itself is made, players create their characters. Players use a table of attributes and descriptors to create Features such as Aquatic Body, Long Ceramic Antennae, or Metal Horns. There are also some "established races" which describe the features of certain famous types of monsters. As the players make their characters, the GM asks them questions about how they fit in the world, and uses that to establish further detail in the group's lore.