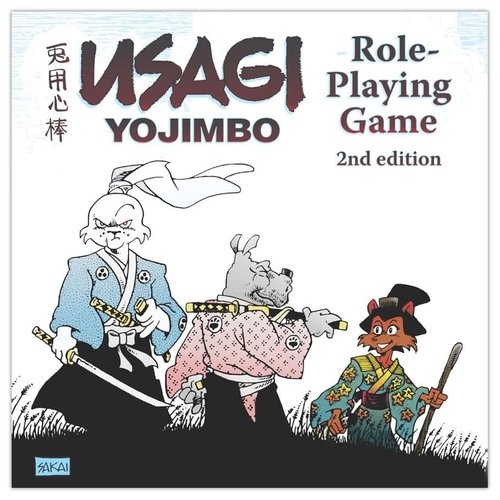 Enter the world of Usagi Yojimbo! Stan Sakai’s award-winning comic series tells the story of Miyamoto Usagi, a swordsrabbit with the heart of a hero, as he wanders a fantastic version of 17th-century Japan. Now, Sakai's Japan and its cast of anthropomorphic characters come to life in stories you write yourself. Explore immense castles and humble villages; meet bounty-hunters and crime bosses; battle ninja spies and scheming lords; and encounter monsters from beyond the natural world. A complete game in one volume, this latest edition of Usagi has been updated and revised with material from over thirty years of award-winning Usagi comics. Take on the role of a fearless samurai, a crafty ninja, a wise priest, or other adventurer in fantasy Japan. Immerse yourself in a richly-detailed world with valiant Usagi, sly Kitsune, gruff Gennosuke, clever Ishida, and other heroes from the comics. Face your challenges head-on, and be a hero! To play this game, you will need two six-sided dice, counters, and a sense of adventure.