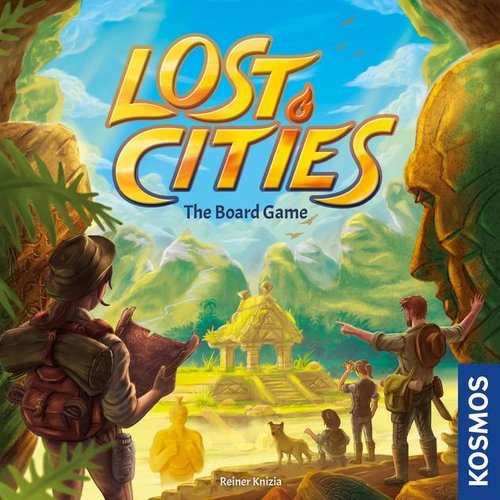 Redevelopment of Lost Cities, first published with altered rules as Keltis, and then published by Rio Grande as Lost Cities: The Board Game with Knizia's original rules and theme.

Primary differences between Lost Cities: The Board Game and Keltis:

1. In LCBG you play 3 rounds, scoring at the end of all 3 for the monuments you collect. (Normal scoring occurs each round.) In Keltis, you only play 1 round, and score everything each round. This is not just a rule difference, as the scoring is different for the monuments/stones based on the number collected.

2. In Keltis, you may play your cards in either order, descending, high to low, or ascending, low to high. In LCBG, you must play in ascending order.

There are more differences, which are non-substantive. Lost Cities: The Board Game has a different-looking board, tiles and figures (meeples) to connect with its predecessor. Card-play in descending order is an optional variant in this edition. The numbers have been multiplied by 5 to strengthen the relation to the card game, and instead of a scoring track you collect your points as golden coins.

Players play cards to move their playing pieces along stone paths. There are cards with 5 different colors/symbols, each corresponding to one path; in addition, each card shows a number (0-10, twice each). In each color, each player can play his cards either ascending or descending. Like Lost Cities, it's better to concentrate on a few paths, since the last spaces grants high points, but ending early gives negative ones.

The player in turn plays one card (out of a hand of 8), or discards one. He moves the corresponding playing piece on the path. Many of the spaces have a token that grants some bonus - either direct points (counted on the scoring track), an extra move on a path, or wish stones that are needed at game end to avoid negative points.

The game ends when a total of 5 playing pieces have reached the 7th space (or more) on their paths. Now, scoring happens: