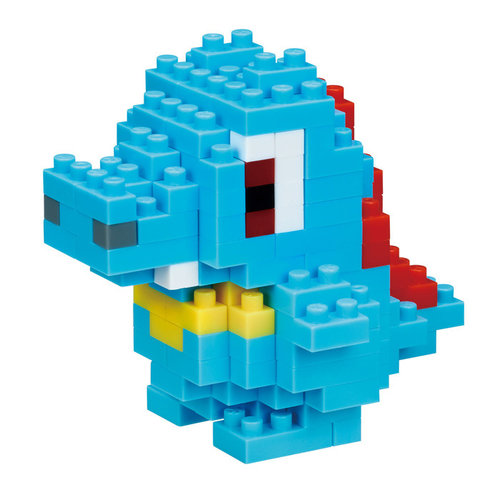 Totodile resembles a bipedal, blue crocodile with red spines on its back and tail. The spine on its back is larger with additional ridges. Totodile's head is large, with ridges above its eyes. Much of the head's size is composed of Totodile's snout and strong jaws. There are two visible teeth on the tip of its upper jaw, and two rows of three teeth on each side of its lower jaw. On its chest is a yellow, somewhat V-shaped pattern that extends to its arms with a line bisecting the pattern. Totodile has five sharp claws and three toes. Its eyes are red and surrounded by a dark blue or black pattern. Totodile tends to be playful by nature, and has a habit of biting anything it sees, including its Trainer. In the wild, Totodile prefers to live along the edges of bodies of water.