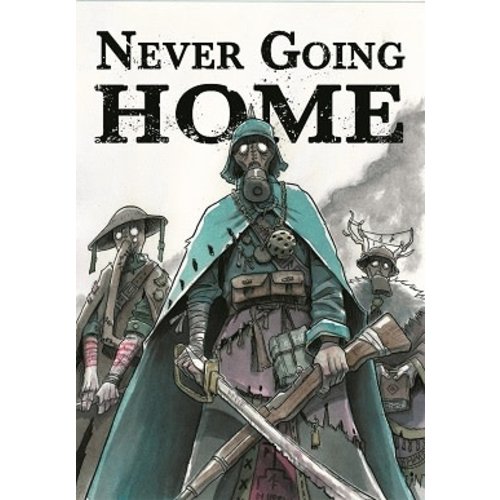 The World is already at War.

Now the Veil has been torn.

The Whispers promise you power.

You may live long enough to lose your humanity.

Party-Focused: Never Going Home uses the +One System to focus play and growth on what an individual character can do as part of the larger story that follows a group of soldiers called a Unit. Individual characters may depart regularly as they die from injuries or collapse into madness due to forces from beyond the Veil. Characters are quick to create, so players should expect to re-join the story portraying a new member of the Unit. Each character can have their own heroic moments, but the story of the Unit is the focus.

Horror-Haunted: The Veil between worlds has been opened by the slaughter from the war; and the monstrous Whispers of beings wholly alien to humanity can now be heard. Some people have listened to the Whispers enough to gain arcane powers and now struggle to maintain control as their minds and bodies begin to change. Others are too far gone, mutated into barely-recognizable versions of their former selves. War consumes the days and monsters stalk the nights. Not even dreams are
safe. Players manage their characters’ mental and emotional resources with a dwindling hand of cards.

The First World War: The setting is the real Earth and the characters are all humans. A terrible new element has been added to the war, but the true horrors of the real war are part of the story as well. The game is set in the years between when the Veil was torn in 1916 and when the war really ended in 1918. The focus is on the front-line soldiers who are fighting and experiencing the worst of the magic and monsters. There is some mention made of, but little exploration of, the “home fronts” of any of the belligerents and civilians only appear in passing.