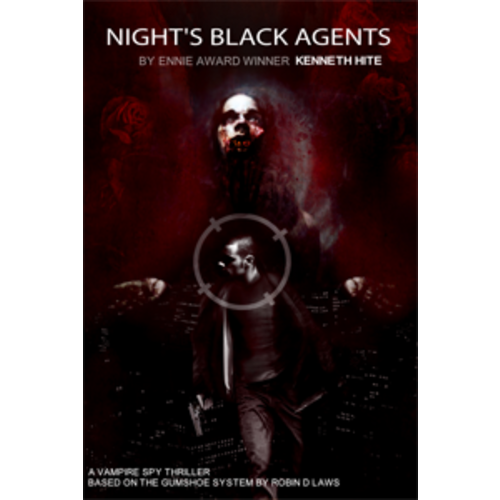 Night’s Black Agents won two silver ENnie awards for Best Game and Best Writing, and was nominated for Best Rules, Best Interior Art and Product of the Year. Find out why!

Night’s Black Agents puts you in the role of a deadly secret agent, taking down the forces of darkness.

Bring your favorite high-octane spy thrillers to the table with Night’s Black Agents from legendary designer Kenneth Hite (Trail of Cthulhu). Have friends who love console shooters? This is the tabletop RPG for them!

The Cold War is over. Bush’s War is winding down.

You were a shadowy soldier in those fights, trained to move through the secret world: deniable and deadly.

Then you got out, or you got shut out, or you got burned out. You didn’t come in from the cold. Instead, you found your own entrances into Europe’s clandestine networks of power and crime. You did a few ops, and you asked even fewer questions. Who gave you that job in Prague? Who paid for your silence in that Swiss account? You told yourself it didn’t matter.

Vampires exist. What can they do? Who do they own? Where is safe? You don’t know those answers yet. So you’d better start asking questions. You have to trace the bloodsuckers’ operations, penetrate their networks, follow their trail, and target their weak points. Because if you don’t hunt them, they will hunt you. And they will kill you.

Night’s Black Agents brings the GUMSHOE engine to the spy thriller genre, combining the propulsive paranoia of movies like Ronin and The Bourne Identity with supernatural horror straight out of Bram Stoker. Investigation is crucial, but it never slows down the action, which explodes with expanded options for bone-crunching combat, high-tech tradecraft, and adrenaline-fueled chases.

Updating classic Gothic terrors for the postmodern age, Night’s Black Agents presents thoroughly modular monstrosity: GMs can build their own vampires, mashup their own minions, kitbash their own conspiracies to suit their personal sense of style and story. Rules options let you set the level of betrayal, grit, and action in your game. Riff from the worked examples or mix and match vampiric abilities, agendas, and assets for a completely custom sanguinary spy saga.

The included hook adventure gets the campaign going; the included city setting shows you what might be clotting in Marseilles’ veins even now. Rack silver bullets in your Glock, twist a UV bulb into your Maglite, and keep watching the mirrors … and pray you’ve got your vampire stories straight. 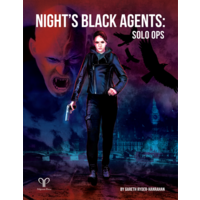