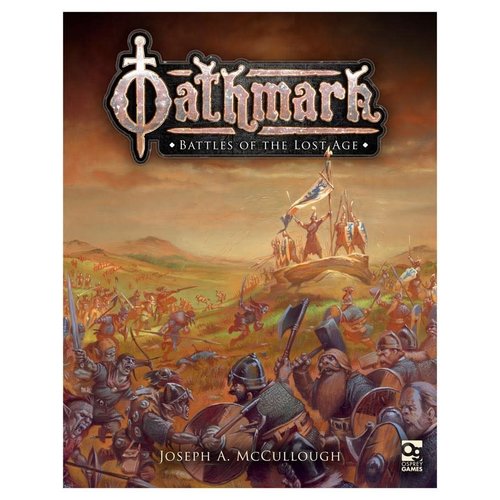 OATHMARK: BATTLES OF THE LOST AGE

A mass-battle fantasy game in which players can field combined armies of humans, elves, goblins, dwarves, and more, and develop that army over the course of a campaign.

Empires have fallen, and the land is broken. The great oathmarks that once stood as testaments to the allegiances and might of nations have crumbled into ruin. In this lost age, fealty and loyalty are as valuable as gold and as deadly as cold iron, and war is ever-present.

Created by Joseph A. McCullough, designer of Frostgrave and Frostgrave: Ghost Archipelago, Oathmark is a mass-battle fantasy wargame that puts you in command of the fantasy army you’ve always wanted, whether a company of stalwart dwarves or a mixed force with proud elves, noble men and wild goblins standing shoulder-to-shoulder in the battle-line. Fight through an integrated campaign system and develop your realms from battle to battle, adding new territories, recruiting new troop types and growing to eclipse your rivals… or lose what you fought so hard to gain and fall as so many would-be emperors before you.