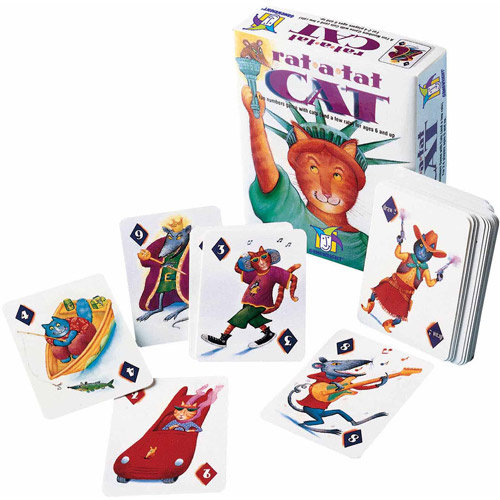 Get rid of the rats and go for the cats! In Rat-a-Tat Cat, less is always better, and you want to go out with the lowest score. Can you remember the numbers on the other players' cards? Can you keep a poker face, but notice when another player looks pleased? Sharpen your memory and your timing, and have fun with the cool cats and bad rats of Rat-a-Tat Cat. This is the Gamewright version.

The object of which is to improve your initial unknown 4-card hand so that you have a lower sum of cards than the other players. There are 66 cards in the deck, 3 different types of action cards (Exchange, Spy, and 2 X draw).

A player's turn consists of drawing a card from the top of the draw pile or discard pile. If the player drew from the draw pile, there are several possible actions: If it is a number card, she may replace one of her face down cards with it (placing it face down) or she may simply discard it. If it is an action card, she may carry out the action or ignore the action. If a player draws the top card of the discard pile, she must replace one of her face down cards with it (placed face down). A player may knock at the end of her turn meaning that each other player has one more turn before the round is over. When the round ends, players turn over their cards and add up their values. The player with the lowest total value wins. Generally the game is played with as many rounds as there are players. Player interaction comes in the form of the action cards. The 'Exchange' card allows a player to exchange one of his cards with one of his opponents. The 'Spy' card allows a player to look at one of his own cards. Finally the "2X look" card allows a player to look at the top card of the draw pile, then keep it or throw it away. If she throws it away, she must use the next card in the draw pile.