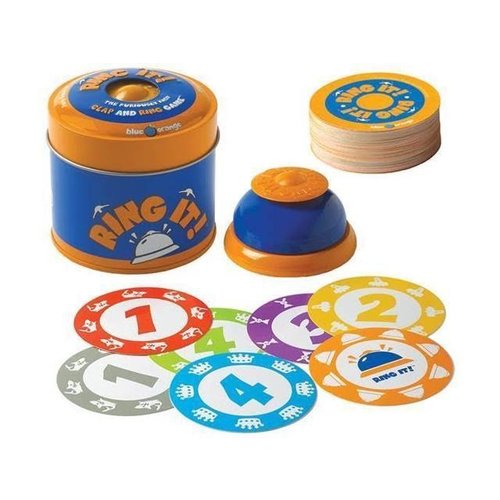 Ring it! includes ninety cards and a bell, along with rules for multiple games, all of which will be having you trying to ring that bell before anyone else.

The cards feature either a colored number or a picture of a bell, and at the start of each of the games you shuffle the cards and deal them face down among the players. Players take turns revealing cards one at a time and placing them face up in individual stacks. In one game you're looking for two cards of the same color, two of the same number, or two that feature a bell; whenever you see a combination like that, if you're the first to clap you hands, then ring the bell, you claim all of the cards in play. Run out of cards, and you're out of the game, with the last cardholder winning!

Other games have you looking for pairs of cards that sum to nine or a sandwich of two cards of the same color/number with another card in between them or even two number cards that sum to a third visible number card. Whatever the game, though, if you see two bell cards, you know that you need to clap and slap.