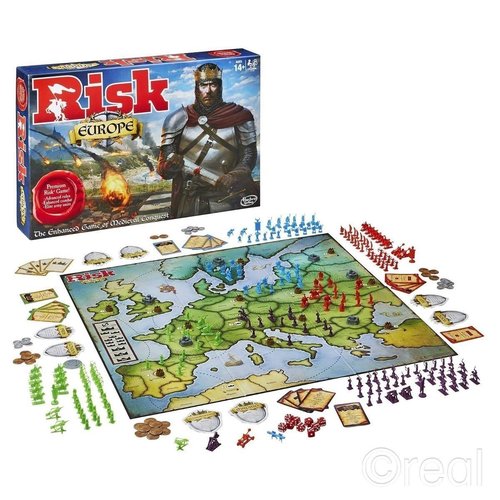 Control the crowns, control Europe in the Risk Europe game--an exciting game of medieval conquest. The game challenges players to step into the role of a medieval king and rule feudal Europe by building castles, taxing subjects, expanding territories, and engaging in battle. This in-depth game of strategy and conquest offers serious gamers a premium gameplay experience. It features 4 separate armies and 7 unique starting kingdoms, each with its own strengths and abilities, plus Kings Orders cards that play an important role in strategy.

User summary:
The goal of the game is to be the first player to control 7 crowns. Each city under a player's control provides a crown and a mission card deck gives an opportunity to earn more crowns.

While there's some similarities to other versions of Risk, the turns are quite different.

Each player has a deck of orders they can take on their turn. They secretly place two orders face down, and the first place starts by revealing an order.

One order card type is to either tax a player's connected territories to gain income or to spend that income on siege weapons, archers, cavalry, infantry units, castles or crown cards.

The other order card type is to expand a player's units into another territory or move units from one territory they own into another.

There are also additional bonuses on some of the order cards.

Battles for contested territories are fought with dice. Non-infantry units are rolled for first by type and deal immediate damage after which all units roll with 3 dice for the attacker and 2 for the defender.

Diplomacy, alliances, and backstabbing are inevitable.