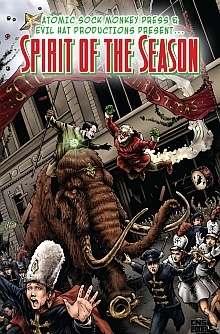 It’s the Most Wonderful Time Of The Year… For EVIL!

The miserly villain Doctor Scrooge hides behind legal technicalities as he steals from the pockets of the impoverished… explorer-gone-mad Jacques Frost preys upon the peoples of the north with his resurrected prehistoric murder monsters… the immortal Baroness Blackheart quests for the Elixir of Life, threatening to destroy all foundations of happiness for mankind… meanwhile Antiochus the Defiler and his spectral Seleucid Squad attack anything sacred or holy…

… and it’s up to Nick Saint — Codename: Secret Santa! — his Reindeer Men, their Chanukah allies, and you to save the holidays from their vile clutches!