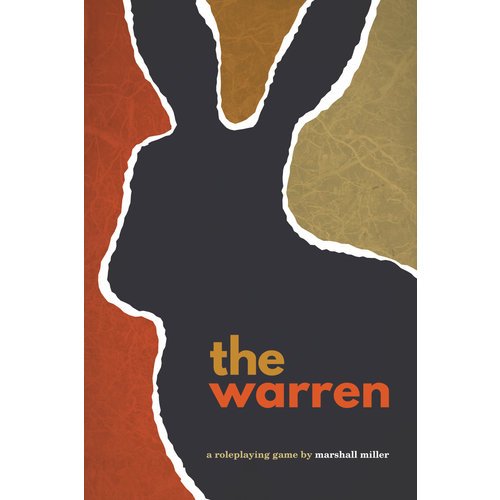 The Warren is a tabletop role-playing game about intelligent rabbits trying to make the best of a world filled with hazards, predators and, worst of all, other rabbits. It is a game about survival and community.

There are many creatures, humans included, that are bigger, stronger, meaner, or more numerous than rabbits. The seasons and the elements do not care that rabbits are only little things. Rabbits cannot hope to meet these threats head on. Only through speed, wits, and keeping a cool head can rabbits bypass the dangers of the outside world.

The Warren is designed for 3-5 players and can be played in a single 2-hour session or over multiple sessions. Campaign play follows the passing seasons and focuses on changing generations of new rabbits each with their own stories.

This game takes inspiration from classic rabbit tales such as Watership Down, Fifteen Rabbits, and Peter Rabbit. It uses a heavily-modified version of the game mechanics from Vincent Baker’s Apocalypse World.

One of the major mechanical differences is the use of a shared pool of character moves, making character creation quick and easy. This reinforces the generational aspect of play, as rabbits are born and later lost or retired from play.

The system is tightly-focused on a set of core moves that reflect the realities of rabbit life –rabbits don’t fight, but they are fast and clever. The rules allow for player-created custom moves, letting them find new, inventive solutions to problems.