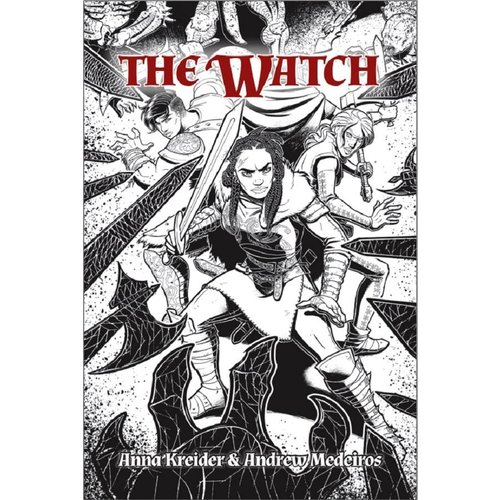 The Watch is a tabletop roleplaying game set in a "light fantasy" setting known as The Clanlands. It takes place during a dark and horrific war between the now-united ten clans who live there and an invading force, known only as The Shadow.

The Shadow is a powerful and insidious enemy that is able to enter the minds of its opponents and slowly turn them to its side; twisting them into unnatural foes. For reasons unknown, The Shadow is able to more easily influence the minds of men, and has turned a great deal of the clan's soldiers against itself.

With most of its fighting force crippled or worse, the clans have joined together and begun enlisting new warriors to defend their homes. Women and non-binary femme people who seem better able to resist The Shadow's hold have been recruited, trained, promoted, and formed into a new order: The Watch.

In The Watch, you'll play a group of elite soldiers who are called upon time and time again to defend villages, attack The Shadow's forces at key locations, scout the enemy's lines, and much more. Each mission comes with its fair share of costs and compromises and you'll need to navigate them in order to be ready to heed the next call to action.

It's in these in-between moments where the rules for The Watch focus themselves: What do you do to unwind from the pressure that threatens to pull you down? Who do you spend what little free time you have with, and why? How will you hold off The Shadow's influence so that you can see the end of this war? That's what you'll have to find out for yourself...