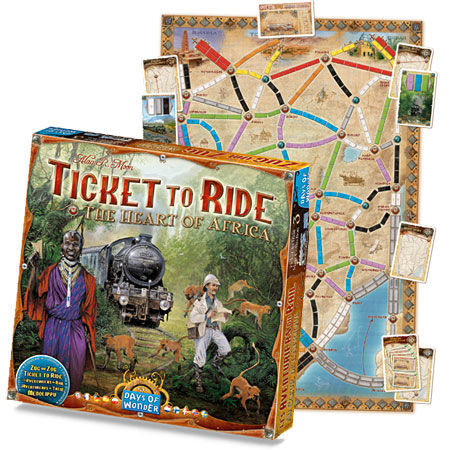 $24.98
Add to comparison Add to wishlist
Days of Wonder
Board & Card , Indoor Games

Set in the vast wilderness of Africa at the height of its exploration by intrepid explorers, missionaries and adventurers, Ticket to Ride Map Collection: Volume 3 - The Heart of Africa, a single-sided expansion map for Ticket to Ride or Ticket to Ride: Europe, focuses on the central and southern "heart" of the continent displayed in a vertical format.

The Ticket to Ride series all build upon a core principle for the game. Over the course of the game, players collect cards in order to then claim routes on the game board between two cities. Ideally the players create a network of routes that connect the cities showing on their secret ticket cards. Players score points both for claiming routes and for completing tickets, with incomplete tickets counting against a player's score.

This expansion introduces 45 new terrain cards, divided into three different terrain types. Each type is associated with different route colors: Desert/Savanna cards for yellow, orange and red routes; Jungle/Forest cards for green, blue and purple routes; and Mountain/Cliff cards for black, white and grey routes. Players can draw terrain cards just like train cards and they may use these to double the value of the routes they claim, under certain conditions.

Buyer Beware: This is an expansion of the base game Ticket to Ride or Ticket to Ride: Europe and requires one of these games to play.