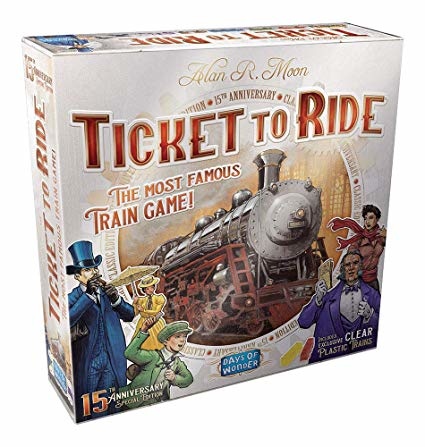 $49.98
Add to comparison Add to wishlist
Days of Wonder
Board & Card , Indoor Games

This is a special copy of the base game Ticket to Ride, set in North America. This special version includes 5 exclusive sets of translucent plastic trains and features a 4 page retrospective booklet which describes the history of the board game.

The Ticket to Ride series all build upon a core principle for the game. Over the course of the game, players collect colored train cards in order to then claim routes on the game board between two cities. Ideally the players create a network of routes that connect the cities showing on their secret Destination Ticket cards. Players score points both for claiming routes and for completing tickets, with incomplete tickets counting against a player's score.