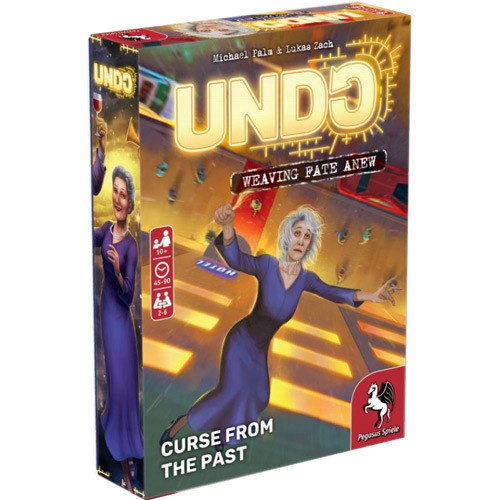 UNDO: CURSE FROM THE PAST

Undo: Curse from the Past is a game in which players are “Weavers of Fate”, time travellers aiming to prevent a sudden death by making changes to the past. Players do this by choosing from a selection of cards representing times and places and making decisions about how to influence an event described on the card. Currently, three Undo games have been released. The series appears to be modelling itself on the Exit and Unlock games, providing cheap, one-off adventures for a low price. This specific scenario sees players travelling to 20th century Germany and ancient Egypt.

Upon opening the game box, players will see two decks of cards with large warning to stop on them. The cards instruct the player on how to setup the game and must be read in the order indicated. Do not shuffle the decks. Roughly speaking, once setup is complete players will have thirteen story cards (which indicate a location/time) set up in front of them with a clue card below each story card. Space is also left for fate cards, which indicate your decision to influence an event, above each story card. Players also have nine time cards and four magnifier cards.

On each turn, players discard one of their nine time cards, these cards act as a timer for the end of the game. As a group, players discuss what story card to visit. In all cases the player who’s turn it is has final say on a decision. Once players decide where to go, the card is turned over and the text is read aloud. Players will have three choices for how to influence the event. Before deciding players can spend one of their four magnifier cards to flip over the clue below this story card or a previous story card that was visited. Once players, decide how to influence the event they find the corresponding fate card, flip it over and place it above the story card. The fate card will have a score that is either -1, 0, +1, or +2 indicating whether you have changed the story for better or worse.