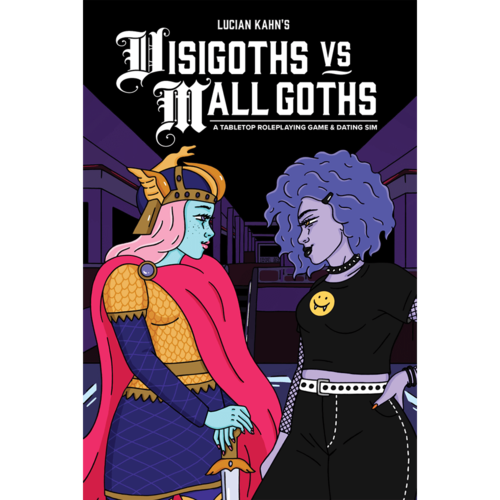 Visigoths vs. Mall Goths is a tabletop roleplaying game and dating sim about the conflicts and romances among the warriors who sacked ancient Rome and 20th century spooky teens, set in a suburban Los Angeles shopping mall during 1996. There are a lot of bisexuals.

* For 4-6 character players and 1 facilitator player ("The Mallrat").

The plot structure of Visigoths vs. Mall Goths resembles an open-world videogame RPG. Designed for either one-shot or campaign play, each adventure episode offers several quests that you may choose to pursue (or ignore), and the mall setting is packed with many strange retro marvels to discover. Or you can just replay the game over and over to kiss all the kissable clerks.

Also a LARPer-friendly introduction to tabletop.

Bonus: you can also use this setting and these supporting characters (NPCs) in other roleplaying games! Expand your universe with goths!

“It is the 21st century and I can finally get my Bisexual take on That Bit In The Mall In Bill'n'Ted and the world is better for it."
- Kieron Gillen, creator of The Wicked + The Divine and DIE

"I love this project for its inherent comedic genius, ‘90s nostalgia, and because of how queer it is.”
Trin Garritano, Games Digital Outreach Lead at Kickstarter, in “Projects We Loved: 15 of Our Favorite Kickstarter-Funded Projects from 2019”

"VG vs MG combines everything I love: occult time travel, the '90s, and queer culture, with things I never knew I needed: an emo grudge tracker and a turf war that shouldn't really make sense but totally does. Lucian makes magic with his games always, and this is no exception."
- Hannah Shaffer, designer of Damn the Man, Save the Music! –