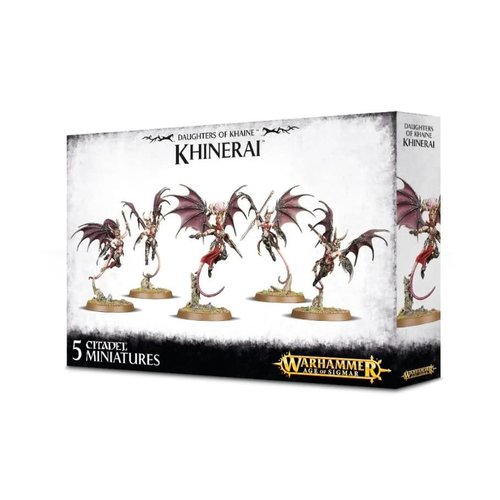 A great ambushing unit that should never be left out in the open. They have very deadly hit and run tactics that will want you to play a bit aggressive with them. Kit can be assembled as Heartrenders or Lifetakers. Read more

The Khinerai Heartrenders sweep out of the skies, dark streaks that cut swiftly through low clouds. With streams of vapor still clinging to their bodies, the winged aelves pull up, using their forward momentum to help launch cruelly barbed javelins with great force. These spike-ridden spears travel with such velocity that they can skewer both a mounted warrior and their steed, and still maintain enough impetus to embed themselves deep into the ground. Should a tempting enough target present itself, however, the Heartrenders will forgive their missile assault and dive straight into combat.

This multi-part plastic kit contains the components necessary to assemble 5 Khinerai Heartrenders. Distinguishable from their Lifetaker sisters by their sinister, full-face horned helmets, they soar through the skies on enormous, spiked wings. Their armor is minimal, designed more to be streamlined for aerial maneuvers than actual protection – thick plate would drag them down, providing a disadvantage to these high-speed killers. Each Heartrender carries a long barbed javelin in one hand, with a heartpiercer shield in the other; these shields are aptly named, featuring large, sharp spikes. You can build a Shryke, which is the unit leader – she is denoted by her unique veiled helmet and loincloth. Each model is attached to its base via a sculpted ruin to which their base connects, providing the dynamic, aerial look they require.

The Khinerai Heartrenders come as 61 components, and are supplied with 5 Citadel 40mm Round bases. This kit can optionally be used to assemble 5 Khinerai Lifetakers. 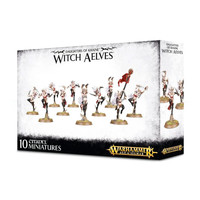 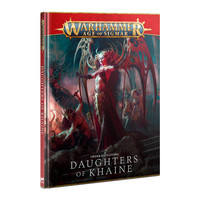