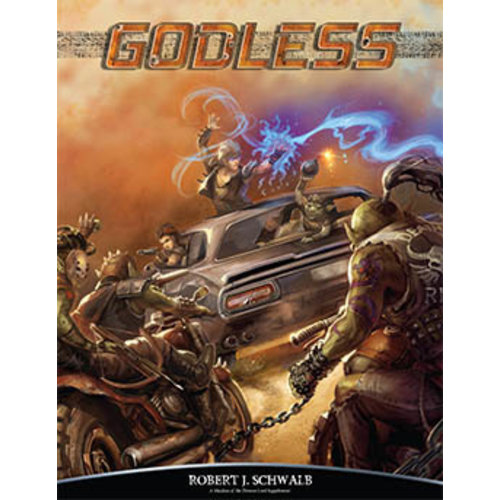 GODLESS: THE WORLD OF FIRE AND BLOOD

Godless is a post-apocalyptic / sci-fi setting that uses the Shadow of the Demon Lord role playing game rules. Inspired by the Mad Max franchise, Godless gives you all the tools you need to transform our own planet into a dark, grim, and gritty world of fire and blood.

After the Cataclysm sundered our world, reducing cities to ruins and bringing nations to their knees, a new threat unfurled its wings to cast a shadow upon our reality. In this spreading gloom caper demons, warped creatures, and horrifying monsters, all of which tear down what’s left of the world in preparation for the coming of their dark master, the dreaded Demon Lord.

Godless is a new setting expansion for Shadow of the Demon Lord role playing game, giving you all the tools you need to transform our own planet into the World of Fire and Blood.

With Godless, you have everything you need to adapt Shadow of the Demon Lord role playing game for play in a post-apocalyptic environment, letting the players create characters who scavenge the landscape for parts, food, and fuel, while fighting off hideous mutants, invaders from other realities, and, of course, demons. With this book, you’ll be able to explore a brand new world in the grip of the dreaded Demon Lord!